Posted at 10:21h in Uncategorised by ElliJohnson 0 Comments

I read an article last week about the artist Frida Kahlo.

Or to be more exact about her personal belongings, and how her lover Diego Rivera had insisted the wardrobe that contained them was not to be opened until 15 years after his death.

What was found inside was a jumble of personal items. Some mundane and some unexpected. All beautiful.

Frida Kahlo had suffered polio as a child, leaving her with one leg shorter than the other.

Then in her 20s she was involved in a bus crash, in which her leg was broken in 11 places. After this accident Frida was in a full body cast for three months.

Her leg was eventually amputated in 1954.

The medical corsets and the artificial leg were found in this wardrobe, along with her clothes, make up and sunglasses. 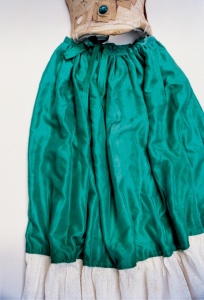 Everything discovered was touched by the hand of Frida. There was not one thing that did not have her creative stamp on it.

She wore her dresses long, to conceal her leg, and these were intricately woven. Clothes made with love and attention.

As her suffering increased so did the elaborate detail on her full length dresses.

Her shoes, one of which was built up, had her distinctive fringing on it.

She designed her prosthetic leg complete with bell and red lace up boot.

She had painted and embellished the medical corsets she had needed to wear.

They had ceased to be practical straight jackets and had become pieces of art.

These items tell a story.

It made me think about how we try and hide the things that cause pain and discomfort.

The way in which we do all we can to appear ‘normal’. To assimilate. To fit in.

When maybe it is the things that point to our brokenness – to the truth of our humanity – that could make us the most truly attractive.

Maybe we shouldn’t always conceal our wounds, concerned with keeping up the charade of respectability. And, rather than through shame veiling our afflictions, maybe we should wear our pain like a medal, or better still like a piece of dazzling jewellery.

And this could act as a sign to others that it is okay not to be perfect.

That maybe it is not our success and triumphs and achievements, but our suffering that makes us most beautiful.

*You can find the article that contained these images here.

Kind of funny graffiti. But not really that funny.

Hey! Hi to all my new followers (and thanks to @an

To Shrink YouWhen you recognise objectification

The brilliant Kathryn Hahn with some thoughts for

Tulip spam incoming. . For a bit of fun- what’s

All the guys. This year’s daffodil line up. Have

Any cookies that may not be particularly necessary for the website to function and is used specifically to collect user personal data via analytics, ads, other embedded contents are termed as non-necessary cookies. It is mandatory to procure user consent prior to running these cookies on your website.